Medicines are boon for human life. Be it a life-saving drug or something as simple as a cold pill, the importance of each of the medicines can only be understood by the patient, and his or her loving ones.

Healthcare industry is being pumped due to the increasing number of diseases and people’s shift towards health care. In this fast-moving world, nobody can afford to stay ill for a long period of time. With the easy availability of medicines and advanced health care facilities, today’s generation is far more safe and secure against chronic diseases.

According to the World Health Organization (WHO), 10 to 15% of the global drug supply is counterfeit and Africa accounts for up to 30% of the counterfeit medicine in circulation. A per another statistic it is estimated that 1 in 10 drugs sold worldwide is counterfeit.

In order to fight the menace of counterfeiting the Indian government is taking various measures. The Union health ministry will make barcode compulsory for all pharmaceutical ingredient packages so that it may help to track spurious drugs and also monitor imported and domestically produced raw materials. Besides the use of digital authentication, physical anti-counterfeiting technologies can play an important role by adding an extra layer of security to the product. 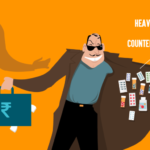 The link between counterfeiting and organized crime

What is an ideal packaging solution for the product and the brand?